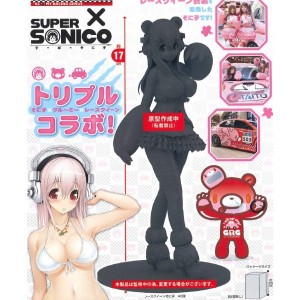 With Super Sonico’s (すーぱーそに子) very own anime part of the Winter 2013 anime lineup, it’s only fitting to have everyone’s favorite pink-haired hottie shown in and around town. A lot of Super Sonico figures have already been released which portray Sonico in different ways from WAVE’s Beach Queen to Zenko’s sexy traditional Japanese-inspired garage kit. Now, we’ll see Super Sonico as a Racing Queen dressed up as a morbid take on the adorable teddy bear! 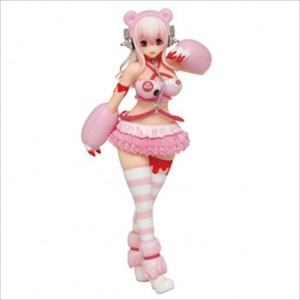 If you haven’t heard of Gloomy Bear yet, here’s a little lowdown for you. Gloomy Bear was created by a Japanese graphic designer named Mori Chack (森チャック). Gloomy Bear is the spawn of Chack’s belief that animals are in their true natures wild and will never be compatible with humans – which explains why Gloomy Bear is drenched in blood from attacking humans.

The Gloomy Bear-inspired Racing Queen Super Sonico is brought to you by Taito. Dressed up in a sexy top and mini skirt ensemble in a pink-and-white motif with blood red (literally) highlights, Sonico struts her stuff in a pose that screams kawaii. Oh, did we mention that she’s never without her signature headphones? This time, they have pink bear ears to go with it.