Asgard Anime is back with another Cosplay Tutorial and this time we’re featuring one of the hottest ladies in the One Piece (ワンピース) universe, Boa Hancock (ボア・ハンコック).

So sit back, relax and learn how you can become Boa Hancock with this tutorial guide!

Ready to cosplay Boa? Let’s get to know her first!

Boa Hancock is the Snake Princess hailing from Amazon Lily (アマゾン・リリー) and is the one and only female member of the powerful Royal Shichibukai (王下七武海). Together with her Boa Sandersonia (ボア・サンダーソニア) and Boa Marigold (ボア・マリーゴールド), the three complete the Gorgon sisters and the three rule the Kuja Tribe (九蛇).

Boa stars as the main antagonist of the Amazon Lily Arc and has made her first appearance in Episode 409 in the anime and chapter 516 in the manga. Boa Hancock is notably the most beautiful woman in the world, ranking only second to that of the mermaids according to the Risky Brothers (リスキー兄弟). 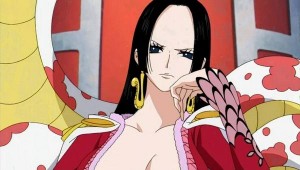 Boa Hancock may be intimidating at first glance but follow through her story and you’ll let out a bark of laughter once or twice.

Boa is highly aware of how beautiful she is. She often uses this as an excuse to do whatever she wants because she believes that the world will forgive her for whatever wrong doing she makes simply because she’s beautiful… and everyone buys it. Boa is so vain that she is used to everyone falling hopelessly in love with her until Monkey D. Luffy (モンキー･D･ルフィ) bounced into her life and showed her that he was impervious to her beauty.

Now, how did Boa react to this? By collapsing of course.

Boa and her sisters were slaves of the Tenryubito (天竜人) and they each bear the mark of the Hoof of the Flying Dragon (天駆ける竜の蹄) burned on their backs. Boa explained that the Hoof of the Flying Dragon is a mark that shows that a person is seen as an object to be used. Which explains as to why she has this serious, no nonsense air because she doesn’t want to show any sign of weakness.

Boa Hancock is madly in love with Luffy and it shows in every living moment she proclaims her girlish infatuation for him. This has even extended to turning her back on the World Government plenty of times. Her love for Luffy has also shown a side of the beautiful Boa that people never possibly thought existed – she looking absolutely monstrous when Smoker nearly killed the love of her life. 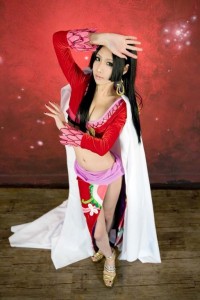 Aside from being the living proof of the Kuja belief that “Strength is Beauty”, Boa Hancock is a fighter that no person should ever overlook as Fleet Admiral (元帥) Sengoku the Buddha (センゴク) acknowledged.

Another testament of Boa’s massive strength is her

80,000,000 bounty. The Pacifistas bore witness to Boa’s talent in hand-to-hand combat that was coupled with her superhuman strength as she wiped them out all by her lonesome and without injury.

The Mero Mero no Mi (メロメロの実) which was Boa’s curse ultimately became her blessing as she uses the Devil Fruit abilities to turn anyone to stone who either fall in love with her or lust after her.

Boa Hancock is also known for using two different types of Haki (覇気) – the Busoshoku Haki (武装色の覇気) and the Haoshoku Haki (覇王色の覇気). With the latter a very rare skill known only by one in a million people.

What more can we say? Boa Hancock is pretty much the epitome of a dream woman. The statuesque Hancock stands at a jaw dropping 191 cm and has the vital statistics to go with it. Kinda hard to imagine that she’s biologically related to her Gorgon sisters.

Boa’s waist-length jet black hair has been designed to frame the sides of her face. Boa was first introduced in her red costume that every anime/manga fan can easily associate with One Piece even if they have never seen or read the series. 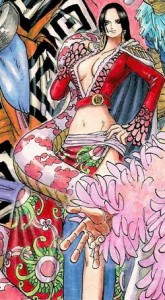 Boa Hancock has a plethora of costumes but is known primarily for her red outfit. This comprises of a very revealing top which emphasizes her large bust paired with a loose, highly detailed sarong which she wears as a skirt and the effect flatters her long legs.

She is seen on some occasions with a white cloak hanging on her shoulders.

To complete the whole look of hottest lady pirate alive, Boa rocks her outfit with a pair of red high heels.

Also, if you take a close look, one important detail is that she wears a pair of large, dangling gold earrings. But zoom in and you’ll see that they are in the shape of a snake. You can grab some really nicely made replica earrings from Amazon here for not too much. 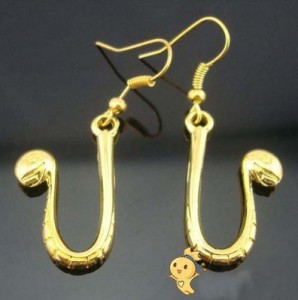 If you have enough time, you can make your own costume using satin cloth. However, if you prefer having one ready made, you can grab your Boa Hancock costume from Amazon here. The Hoof of the Flying Dragon drawn on your back is optional. 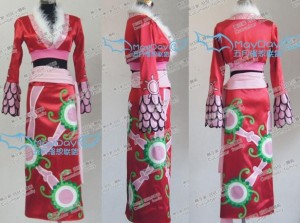 Boa Hancock is known for her flowing black hair that falls to her waist. To make her hair standout in the world of anime and manga, she has side fringes that almost reaches her chin.

If you have natural, long black hair, you can style your hair as such and you’re good to go.

If you don’t have hair that could rival Snow White’s, you can either die your hair black temporarily or just grab a wig! Amazon have a perfect wig here. 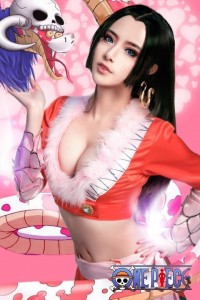 Dear sweet Salome (サロメ) who celebrates its birthday on March 6 and is seen almost always smiling is Boa’s Snake Weapon.

Salome is the largest Snake Weapon in existence and is never seen without its horned skull helmet. In photo shoots, some Boa Hancock cosplayers would often choose to have it edited as seen in Xue’s Boa Hancock cosplay photo. Otherwise, they would go without it. The same goes for congoers.

If you want to have your own Salome to cuddle after your event, you can make one for yourself. Cosplayer OwlDepot has shared her adorable Salome plush via the AC Paradise website.

III. GET YOUR MAKEUP READY

If you were born with naturally dark eyebrows, then all you have to do is shape your eyebrows. Boa Hancock has thin eyebrows and if you really decide on this, you can trim your eyebrows thin. Otherwise, just shape and darken them with an eyebrow pencil.

On the other hand if your eyebrows aren’t dark, try this eyebrow tutorial out by Minsooky:-

Is this your first time pulling off Boa Hancock? Worry not for Japanese makeup artist Inui Ayumi is here to fill you in on what a Boa Hancock cosplay needs from a makeup guide to some basic poses. Check out her highly detailed 6-minute video:-

No problem! Youtube’s zWinnieYap has got you covered with the 94th episode of her Anime Eye Makeup series featuring Boa Hancock.

In this 3-minute video, Winnie teaches you how to capture Eiichiro Oda’s (尾田 栄一郎) signature art style and using it to design your eyes that way. This tutorial could possibly even teach you how to draw! That’s enough chatter from us so click away on the video below so you can learn the ropes on how to have accurate Boa Hancock eyes:- 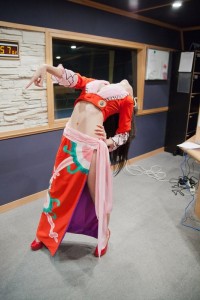 Costume? Check. Makeup? Check. Hair? Check. Great! Everything’s complete! Now, what else does a great Boa Hancock cosplay need? It’s acting out the character of course! Boa is known for acting like a queen and of course, her signature backbreaking pose.

The beautiful Sunny Lin (林采緹) has set the internet ablaze with her Boa Hancock cosplay complete with the pose that would make the real Boa Hancock proud! Other than Sunny Lin, a lot of Boa Hancock cosplayers have also pulled of this cool feat. This pose may take a bit of practice so make sure you don’t hurt yourself by doing this.

Got some Boa Hancock cosplay experience? Share them right over at the comments section below and add some more to the goldmine of information in this guide!