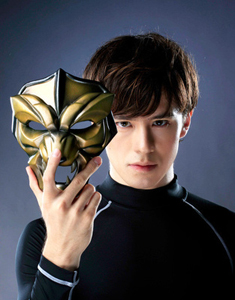 On Saturday, the Eiga.com website has revealed the first special trailer for the live action adaptation of the manga Tiger Mask. The manga was originally written by Ikki Kajiwara and focuses on a wrestling hero. Along with the trailer is the first visual image of the Johnny’s singer/actor Eiji Wentz, who will take on the role of the titular hero. Natsuna Watanabe co-stars Wentz as Ruriko, and Show Aikawa will play Mister X.

Tiger Mask is the heroic alter ego of the main character, Naoto Date. Date is a pro-wrestler who fights against an evil wrestling association and rallies for children in an orphanage. In the new settings for the film adaptation, Date will wear a special suit that will transform him into the hero Tiger Mask, with enhance speed and strength. The mask has been modified, with inspirations taken from the western comic action heroes such as Batman and Spiderman for a modern look.

For those who have never read the manga, the film will take one third of its total screen time to trace Date’s roots in the evil wrestling association. The company, Tora no Ana, is set on a mafia-like organization that puts many lives at risk, including its wrestlers.

While Wentz has acknowledged that he had not read the original manga before, he says that the film’s new version for the Tiger Mask is completely perfect for the modern Naoto Date.

The original manga ran from 1968 – 1971 in various magazines. This is Kajiwara’s life work, along with the baseball manga Kyojin no Hoshi. There are even true to life wrestlers who have been inspired by the plot to compete under the persona of a Tiger Mask hero. The manga has also been adapted into an anime series in 1969.

Tiger Mask was announced in 2011, and the film will open in Japan this November 2013.