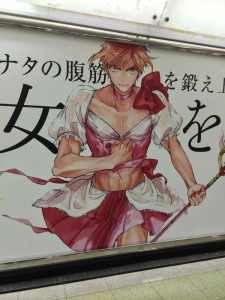 Some find it hilarious, some find it confusing, some may even find it weird. Nevertheless, Chousen Moudama’s (毛魂一直線) take on this genre is nothing short of pure genius. Twitter user YoshiYoshi gave curious readers a lowdown on Mahou Shoujo Ore and it goes like this:

A 15-year-old girl is a newbie idol who is highly infatuated with her best friend’s older brother and her crush is already a massively popular idol. Unfortunately, she runs into a member of the yakuza who knew her mother was a former Mahou Shoujo with the yazuka member as her mascot. Things don’t turn out well as her crush gets kidnapped by demons with muscular bods topped off with squirrel heads. She makes a contract with the yazuka and she turns into a magical girl… who unfortunately turns her into a handsome bishounen instead with a body to go with it.

This amusing two volume manga will be getting an anime adaptation and it’s appearing in ads like the one in Shinjuku station. Read up, read up on Mahou Shoujo Ore right here.