Anime Film Santa Company Preps Up for Next Winter Release 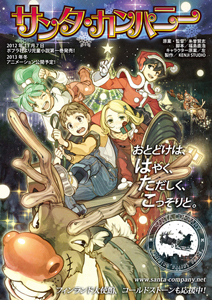 Heads up! A Christmas themed animation film is on the works, and it’s bound to put you in good holiday spirits, that is, next winter! The unit director of the late Satoshi Kon’s stagnant Yume-Miru Kikai film Kenji Itoso, is revealed to be currently planning and directing a new anime film called Santa Company. However, it is not until 2013 that it will be shown in the screens.

The staff for this project includes Naohiro Fukushima, who will be writing the script. Hidari will draw the original illustrations which have been provided as the basis for the character designs. KENJISTUDIO, Itoso’s own production company, will be animating the said film.

The three main creators of the project have already published a Santa Company children’s novel, which reveals the plot’s premise this month. In the story, Noel is an 11-year old girl who is much like The Grinch—someone who hates Christmas. She has lived with her father after her parents had divorced three years from present. However, her dad always ends up to be too much caught up at work at this time of the year that she ends up alone in the home.

One solitary Christmas Eve, Noel walks in her apartment complex elevator to go to her home. she was expecting the same, dull feeling she has every year, but only to be surprised when the doors open. She finds herself in a different place—a busy, great and wide factory, owned by Santa Claus himself! The popular Christmas figure has decided to go corporate with Santa Company, and their motto is “Swiftly, surely, secretly.” This allows one to take order and deliver premium quality presents to children all over the world, all in secret.

With this newfound adventure, Noel takes a turn of perspective of Christmas, as she takes off the sled with her friends and deliver presents.