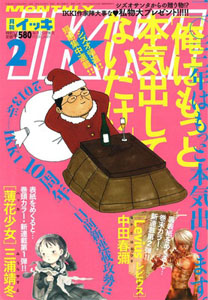 Manga creator Shunju Aono, known for his works in I’ll Give It My All… Tomorrow, will be launching a new series. Titled Ore wa Motto Honki Dashitenai Dake, this new story will be included in the new manga lineup by Shogakukan’s Monthly Ikki. As announced on December 25, Ore wa Motto Honki Dashitenai Dake will be launched on the February 2013 issue of the magazine, along with Yasuto Miura’s Hakka Shojo manga in the same issue.

The original manga I’ll Give It My All… Tomorrow (Ore wa Mada Honki Dashitenai Dake) follows the life of a hapless 41-year old father named Shizuo and his 17 year old daughter. Shizuo wants to become a manga creator, spending is days writing and working along with his menial part-time work. Unfortunately, passion and earning for income doesn’t mix quite easily, and Shizuo encounters many misadventures during his progress.

Ore wa Mada Honki Dashitenai Dake is Aono’s original series, a comedy themed manga which ended in the August issue of the same magazine. The new plot, Ore wa Motto Honki Dashitenai Dake, is a spinoff manga series that features one-shot stories. It follows the original manga’s main character, Shizuo, along with the people around him. The first story highlights Shizuo and Tatsuhiko Mori during Shizuo’s task as a salaryman.

A live action film adaptation of the original manga will be launched in Japan on June 15. Shinishi Tsutsumi will take the protagonist’s role Shizuo. This film will be directed by Yuichi Fukuda, who has been involved with series such as Saru Lock, One Pound Gospel and The 3-Mei Sama. Gontiti, the acoustic guitar duo, will be scoring the music for the show.

Ore wa Mada Honki Dashitenai Dake was launched in the in 2007. The fifth compiled volume of the series will be shipped in Japan this past September.