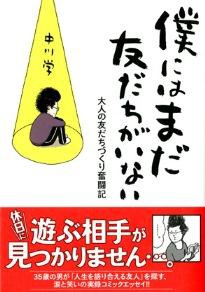 We have seen many live action series based on manga and television anime, and many of them have indulged the fans with in-the-flesh journey of the characters they used to only read. Through live-action, we can thoroughly feel the character’s emotions, attitudes and reactions towards everything that is happening to them. It’s a great spin off to any written work, having a true human input to every given feeling.

Here’s another live action series coming your way, and it’s sure to make you relate to the entire story. Manabu Nakagawa’s original comic plot Boku ni wa Mada Tomodachi ga Inai, I Still Don’t Have Any Friends, is now being adapted into a live action series for television, set to pilot on the Japanese NHK E-telechannel.

The three-part pilot program has already begun running on Thursday, included on the audition program Aoyama Iseg Kaihatsu, the Development of Aoyama Iseg. This will be broadcasted once a week for three regular weeks. Local popular idol unit Momoiro Clover Z hosts the Aoyama Iseg Kaihatsu variety, where viewers can watch pilots for proposed series and make a vote on which one they will want to turn into full regular shows.

This comic essay book from Nakagawa has been published by the Media Factory. The protagonist is actually based on the author himself, a 35-year old man who has worked in odd jobs, including substitute teacher and shiitake mushroom harvester, before finally moving in to Tokyo to become a manga writer in 2011. Unfortunately, his manga does not sell compared to many popular titles, and he is very bad socializing with people.

Kenta Hamano will play the lead role of Manabu, Emiko Kawamura (half of the comedy duo Tanpopo) and Jiro Hachimitsu (half of the Tokyo Dynamite duo) will star in this project.

You can watch the first part of the pilot on the Aoyama Iseg Kaihatsu’s official website.