Kotonoha No Niwa Animated Film Slated in First Half of 2013 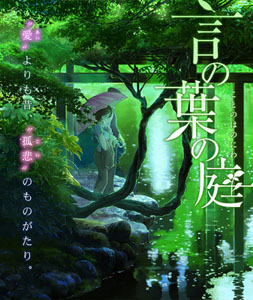 Makoto Shinkai, the renowned director behind Children Who Chase Lost Voices, 5 Centimeters per Second and Voices of a Distant Star, had just announced on Christmas Eve a new anime film project he is creating. This will be another epic animation, the creator says, and Shinkai plans to open the film in the first half of 2013. The planning started this past spring, and the website provides a hint that this will be , “A tale of ‘lonely sadness,’ older than even ‘love’,” as the tagline describes.

Shinkai has started his career by making his own anime almost by his own. He is responsible for directing, writing, and even voice-acting. His sincere passion for his works paved the way for his series to be known. The title of this new film is Kotonoha no Niwa, which can be translated as “Garden of Words,” or in thought, a garden of thousand pieces of words.

It is with this thought that Shinkai also mentioned in his website that this is the first time he is making a “love” story, wherein he uses the traditional Japanese meaning of the word. He adds that there were words, long before characters were created to write them in this world.

True enough, the Japanese language during the period when it has no written form is known as the Yamato Kotoba. Within this era, the language had its own pronunciations even before kanji characters are imported from China’s dialect.

At the time, “love” was written in the characters of “lonely sadness” (恋). According to the creator, the modern concept of love (愛) was imported from the western culture. While Kotonoha no Niwa is said to be set in the modern times, it will be focusing about 恋 in the original “lonely sadness” meaning—yearning for someone in dismal solitude rather than the modern context of it.