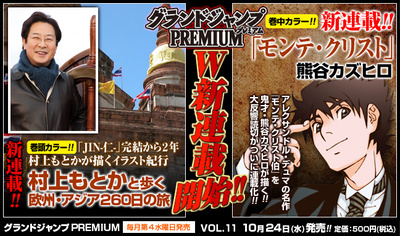 Reading old literature could be tedious to some. Who would want to lay his eyes on a thick, dusty old book full of heavy words, with no good artwork to distract you every now and then? Too much words may sound bad, especially for those who are not into reading, and may find their heads aching after and hour or so, entirely forgetting what the book is actually all about.

Such a grand, tedious experience, right? And many students would want to exchange their dusty novels into mangas just for a delightful read.

Well, one author has devised a way for making an old world story come into sense with a modern appeal. And he’s doing it not by words—he’s about to draw a new world into the known plot, making it a fresh new experience for the young readers to enjoy and digest.

Kazuhiro Kumagai, known for his work Samurai Gun, is about to launch his newest manga series which adapts the Alexandre Dumas creation, The Count of Monte Cristo. Sounds promising, for this title enters the 11th volume of the publication Shueisha’s Grand Jump Premium Magazine this October 24.

Kumagai has originally published the story as a one-shot plot in April, and now, he is bent on continuing what he has started. His adaptation of the Count of Monte Cristo takes place in the 19th Century France, in the middle of the Industrial Revolution. A man, who is wrongfully accused, was sent to suffer in prison. However, due to the events brought by fate, he managed to escape the fortress, swearing to exact violent revenge against those who has accused him.

The book, considered a literary classic, is written during the 1800s. Kumagai has derived the title as the same plot was taken, only rounded up with a fresh twist and an exciting manga adventure to boot.