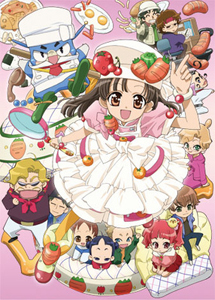 It is not surprising that Japan loves eating. With so many local delicacies to enjoy, new flavors to discover and new themes to feast on with the eyes as well as the stomach, Japan is a ground for fresh cuisines. No wonder that even in the animation world, Japanese cookery still exists. We’ve shared popular cooking manga series now being remade into live action, and new animation with cooking themes as well. However, this time, we’re saying goodbye to a long-running title that has been a part of many fans’ lives.

After running for four years, the children’s cooking show Cookin’ Idol Ai! Mai! Main! is finally coming to an end, as NHK E-telechannel states. The anime segments in the program are produced by Studio DEEN, wherein children can learn to cook the fun way with the heroin Main. Main demonstrates cooking various dishes, aided by her cooking fairies, giving off an educational yet enjoyable experience for the kids. The live action segment has Main’s voice actress Haruka Fukuhara, who takes on the challenge of cooking the actual dish.

The anime / live action hybrid program will be replaced by the new program, Susume! Kitchen Sentai Cookrun, taking over its current timeslot. In the series, three siblings receive various cooking skills from super chefs outside space. Ringo, Seiji and Kumin (Apple, Sage and Cumin) are in their grade school years and they team up as the Kitchen Sentai Cookrun to ward off the evil army called Dark Eaters.

Cookin’ Idol Ai! Mai! Main! will air its last episode on March and the new program will launch on April.