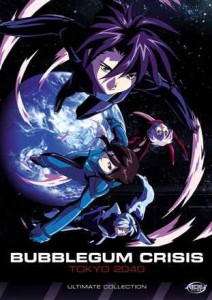 The Asgard Anime Vault celebrates old school anime that certainly made every 90′s otaku proud have lived those years as well as introduce young otakus to these great titles. This week, Asgard’s spotlight is on Bubblegum Crisis Tokyo 2040.

Bubblegum Crisis Tokyo 2040 (バブルガムクライシス TOKYO 2040) is a remake of the original Bubblegum Crisis which was first aired in 1987 as an original video animation or OVA. Both are themed with cyberpunk mixed with action.

Megalo City, formerly known as Tokyo, has risen from an earthquake that destroyed their city. With the help of autonomous artificial intelligence called boomers, the city was rebuilt andhas thrived. Renegade boomers however became a problem and this is where the Knight Sabers enter.

The Knight Sabers is a group of women clad in hardsuits who destroy these rogue boomers. Made up of Priss Asagiri, Linna Yamazaki, Sylia Stingray and Nene Romanova, the Knight Sabers prove much more formidable in combat against these boomers compared with the AD Police who constantly begrudge this act.

The women who make up the Knight Sabers are what you’d hardly imagine to be behind the those hardsuits. Priss Asagiri, a complete lone wolf who sings in a rock band, is the strongest of the four; her blue hardsuit was made for close combat. AD Police operator Nene Romanova is the team’s happy-go-lucky member who makes up for her lack of combat skills for her hacking abilities with her red hardsuit. Cheery office worker Linna Yamazaki’s green hardsuit is well equipped with a ribbon cutter which was added on whim thanks to Nene. Billionaire Sylia Stingray, the daughter of reknowned Dr. Katshuto Stingray, is the founder of the Knight Sabers and is the proud owner of the deadly yet graceful white hardsuit with the laser sword.

I remember when this aired crazy late on the Adult Swim section of Cartoon Network, must have been ten years ago now. Loved the series, loved that CN actually played decent anime. Bring back the likes of Evangelion, Trigun and Bubblegum Crisis!