Yowamushi Pedal Encourages You To Drink Up With Pocari Sweat 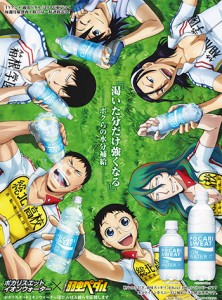 Yowamushi Pedal first appeared as a manga on February 2008 and is still an ongoing series. The story cirlces on Sakamichi Onoda, a high school freshman who was labeled as a true blue otaku. Since his childhood, Onoda’s choice of transportation is the mamachari. His talent for biking was first noticed by his fellow freshman Shunsuke Imaizumi (今泉 俊輔) who saw Onoda riding his bike in a steep road. Later on, another freshman who goes by the name of Shokichi Naruko (鳴子 章吉) meets Onoda. Not long after, both Naruko and Imaizumi try to convince Onoda to try out for the bicycle racing club and the rest, as they say, is history.

Itching to ride your bike? Don’t forget to grab a bottle of Pocari Sweat on your way out!