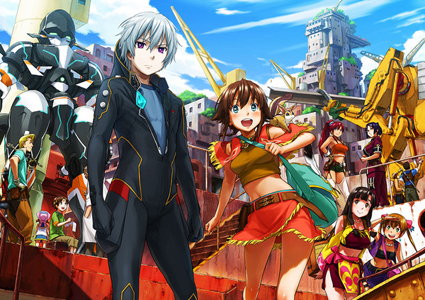 There’s a new anime project that will surely suit your viewer taste buds, as it highlights a circumstance which had just occurred in many parts of the world. This new animation includes the help of Full Metal Alchemist 2011 Film’s director Murata, and Urobuchi, Madoka Magica writer. It’s a science fiction series that will invite you into a new world of adventure, struggles and survival, as it focuses on a flooded world and how to live with it.

The Famitsu website of the production company Enterbrain had just revealed on Monday the plot and characters of their new and original sci-fi series called Suisei no Gargantia, which is currently animated by the Production IG.

As stated, Kazuya Murata, known for his work in FMA’s The Sacred Star of Milos, will be directing the scripts. This production is supervised and written by Gen Urobuchi. Both Murata and Urobuchi has collaborated on the original concept of this anime. Manga artist Hanaharu Naruko will be creating his first original character designs slated for a television anime. Makoto Ishiwata will be in-charge of the mechanical illustrations and Taro Iwashiro, who also has worked with Murata in the Full Metal Alchemist movie, will score the music.

The plot will begin in the distant future, located within the far reaches of the galaxy. The race called Human Galactic Alliance, has been struggling for its survival against a war breeding cultured called Hidiaasu. While involved in an intense battle, a young lieutenant Redo and his mobile weapon—a humanoid kind, Chamber, are swallowed up into a warp of time and space.

Redo wakes up after an induced hibernation, only to find out he has arrived on Earth, which is a planet to them is on a different frontier. This planet was flooded by the seas, and people live upon gigantic fleets of ships, taking relics from the deep ocean so that they can survive.

Gargantia is one of those great fleets where Redo has arrived. He has no knowledge of the planet’s history or culture, and thus he is forced to live alongside 15-year old Amy, a girl who serves as a messenger aboard the fleet. Other characters include Saya, another messenger, Melty, Bellows, Rijetto and Pinion.

This anime will premiere on April 2013.