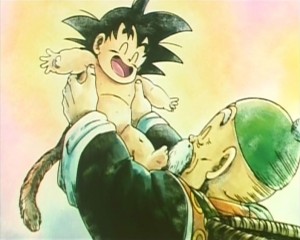 By now, we all know that Dragon Ball’s (ドラゴンボール) Son Goku (孫 悟空) happens to be an alien called Saiyan (サイヤ人) from the Planet Vegeta (惑星ベジータ) who was sent to Earth to destroy it… until he fell on his head and lost his memory. Prior to Goku’s transmission to Earth, Goku was a wee infant screaming incessantly in the nursery beside and an irritated baby Broly (ブロリー) and an agonized Bardock (バーダック) who only considered Goku’s power level of 2. Now that we’ve met Goku’s father, it’s time to meet mom!

The one and only Akira Toriyama (鳥山 明), who brought us the Dragon Ball series as well as other great anime/manga franchises such as, has introduced Goku’s mother in the March 2014 issue of Saikyo Jump (最強ジャンプ). Gine (ギネ), the said mother of Goku, is a female Saiyan who has a gentle nature – something highly extraordinary as Saiyans are a race of ultra violent monkey-like creatures. Gine will make her first appearance in a bonus manga in the April 4 release of Toriyama’s Jaco the Policeman (銀河パトロール ジャコ) collection.

Gine is a a fellow member of Bardock’s squad and the two developed feelings for each other when Bardock protected Gine from harm during battle.