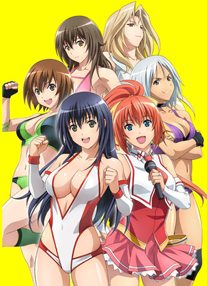 An idol turned pro wrestler! What in the world is going on? This cute but chaotic plot is the storyline for Sekai de Ichiban Tsuyoku Naritai (世界でいちばん強くなりたい! I Wanna Be the Strongest in the World!). The commercial for the female wrestling idol manga has just announced that an anime production is currently ongoing. Through this teaser, fans can hear snippets of the song “Beautiful Dreamer” by Kyoko Narumi.

The commercial has also featured some of the main characters whom viewers must know. All of them are pretty and gives a hard punch! Let’s start off with the leads, shall we?

Ayana Taketatsu will be the voice for the character Sakura Hagiwara. Sakura is the main vocalist of Japan’s most famous idol group Sweet. However, driven by a really confusing impulse, Sakura decides to become a female wrestler one day.

Kana Asumi will be playing the role of Elena Miyazawa, a singer who rivals Sakura and desires to be the top idol in the group Sweet.

Kyoko Narumi plays Misaki Toyoda. She is the Berserk group’s top wrestler, a pro in her own kind. She has placed @12 in the Shangri-La world rankings.

Hisako Kanemoto will be playing the role of Moe Fukuoka, a high school girl who is the world champion in the Mugen-Style karate.

Kiyohito Natsuki and ESE has launched the original manga in the debut issue of Comic Earth Star back in 2011. The fourth compiled book volume has been shipped this September. Sekai de Ichiban Tsuyoku Naritai is the first 30-minute television anime taken from a manga from a magazine.

Watch the commercial below: