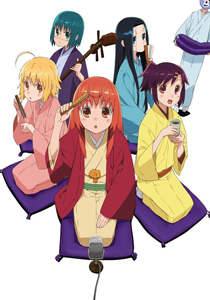 During the Anime Contents Expo, popular animation studio JC Staff has recently revealed that they will be producing an animation for the manga Joshiraku. The manga, created by two collaborators Koji Kumeta and Yasu, follows the fictitious story of five female performers and their behind the scenes event. This gag comedy trails back to the old Japan where Rokugo performances are among the most popular forms of entertainment in the locals.

This project reunites Tsutomu Mizushima, director of another funny series Squid Girl, and writer Michiko Yokote. This unique plot highlights the bantering sequences of traditional performers wherein all must work together in spite of their many differences. The character and their seiyuus are as follows:

Mari Buratei, voiced by Ayane Sakura. Mari is the main character of the manga, known for her long red hair and her recognizable masculine tone and Edo accent. She has great reverence for her parents and is a kindhearted girl.

Kigurumi Haroukitei, voiced by Kotori Koiwai. The girl with a cream-colored main that likes cats immensely, Kigurumi tends to act cutely in front of others to gain their attention.

Tetora Bouhatei, voiced by Nozomi Yamamoto. A girl with a black hair, she keeps her main tied in a regular ponytail. She offers 300 million yen just to find a searched-for criminal, which is associated with an unrevealed mystery.

Kankyou Kuuribiyuutei, voiced by Yoshino Nanjou. A typically silent girl in glasses, known for her musicality.

Kukuru Anrakutei, voiced by Saori Gotou. The girl with a long, straight black hair; she is very good at acting but is in search for her mother who has disappeared years ago.

The plot was created by Kumeta, with the illustration created by Yasu, who is known for the distinct artwork for Toradora!Joshiraku was serialized in the Bessatsu Shounen Magazine beginning September 2009 and already has three complete volumes released in the market.

The anime is scheduled to premiere this July 5.