Published by SchoolGirlBlogger on February 4, 2012 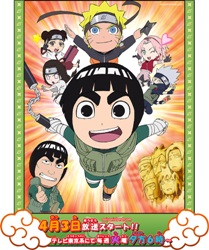 Rock Lee was introduced in the first few episodes of Naruto as a ninja without a talent for both ninjutsu and genjustsu. Instead of being let down by his peers, Lee persevered and was taken in by Maito Gai. Perpetually optimistic and hardworking, Lee is easily indentified as a younger clone of Gai-Sensei, both having the very same bowl-shaped hair cut and eyebrows that could rival even the fuzziest caterpillars. And let’s not forget the green, body tight jumpsuits that they are quite known for.

Originally drawn in “chibi”, the super-deformed, child-like appearance of the characters make Rock Lee’s spin-off manga appear quite cute to readers. Even if he had those bushy eyebrows. Although the manga is comedic in nature, Rock Lee’s fiery dream of becoming the best ninja in all of Konoha is focused even more on this series.

Rock Lee fans should mark on their calendars that the anime version of Rock Lee No Seishun will debut on April 3, 2012 on TV Tokyo.

This Naruto SD is absolutely ridiculous! I can’t believe Bleach was cancelled for this! wtfff?