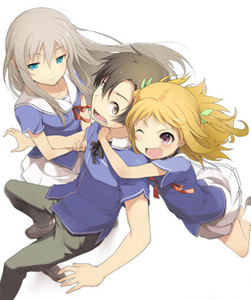 Recently, a train ad for this animation project franchise has just revealed the main cast for the anime version. The ad has been designed as a parody of ads found on regular Japanese tabloid newspapers and gossip magazines, attracted many attention as a hit news. The main cast lists down the following:

The OreShura light novel trails after the life of a boy named Eita. He has a childhood friend, Chiwa, who is like a little sister to him. He and Chiwa has a close relationship which includes hugging and glomping without any malice. However, a silver-haired girl named Masuzu just came from abroad, and in order to fend off unwanted attention (for this girl is quite a beauty), she makes Eita her fake boyfriend. Now this sets off a fiery feud between the two girls for Eita’s affections!

OreShura will premiere in January 2013.