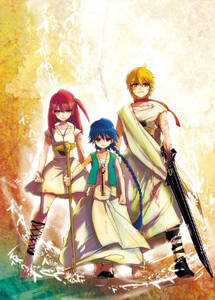 Magi, Ohtaka Shinobu’s currently ongoing manga, has been green lit to have an anime adaptation. This project will be produced by A-1 Pictures, known to have created known titles such as Ao no Exorcist, Tsuritama, Ano Hi Mita no Namae wo Bokutachi wa Mada Shiranai, and Uchuu Kyoudai. Magi, also known for its subtitle, the Labyrinth of Magic, centers on an Arabian Nights theme which features events and occasions situated on the mysterious dessert lands hiding treasures and whimsical genies.

The manga began to be serialized on the popular comic magazine Weekly Shounen Sanday since 2009. There are already twelve volumes which have been released, with total number of printed copies reaching to three million. There are also individual chapters which have been published in the Tankouban volumes of Shogakukan. The fantasy series features an exciting treasure-hunting experience with characters all donning that distinct Arabian style.

Aladdin, the main character, is a young man with a pure heart. However, this scantily living lad is unfortunate to be born as a street rat. Luck falls on his side as he travels into a desert land and discovers a magical flute which summons a mythically powerful creature—a djinn. This djinn, named Ugo, has a strong and muscular built, but the problem is that he cannot remove his head from the flute. Thus, this gives him an appearance of a headless ghost which causes him to frighten everyone whom he wanted to rescue.

Ugo and Aladdin meets Alibaba, a young man with an intense greed, trying to get rich. Alibaba thought Ugo will become a powerful ally in helping him find treasures in a secret dungeon. Aladdin then resorts to join him and they encounter Morgianna along the way. The slave girl ran away from her master, trying to gain freedom. As they travel together, they get to meet other powerful djinns, and with this their journey leads to a childish encounter to a destined fate of ruling the world.

Maga will premiere on MBS, TBS every Sunday at 5:00 PM, starting this October.