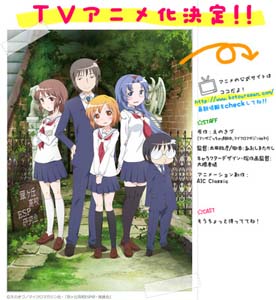 In the anime world, everything is possible. Ordinary highschool students turn into capable warriors, shy ladies are actually true princesses, awkward boys become knights and mafia leaders, and the list goes on. This universe allows one’s minds to soar, and every bit of adventure comes along with something fictional and sometimes, absurd. Well, this new anime is about to be an added cast on that lot, with its droll theme infused with a sci-fi twist and a whole lot of romance abound.

Known manga creator Enogizu had just announced on Tuesday that his four-panel online romantic-comedy manga series is now set for its own television anime adaptation. The series, dubbed as Kotoura-san, is a school fantasy plot which trails after the life of Haruka Kotoura, a mysterious girl who just transferred into a new school. Well, she could turn out normal and completely ordinary, if only she doesn’t have this one peculiar attribute—read people’s minds!

Mitsudomoe, Minami-ke and Yuruyuri director Masahiko Ohta is leading the anime production at the studio AIC Classic. Alongside him is Takashi Aoshima, who worked with the similar titles, and will be in charge of the scripts of the series. Another one familiar cast is Takaharu Okuma who will be creating the character designs and will also lead the group as its chief animation director.

Kotoura Haruka is a 15 year old girl, a transferee, and who happens to read people’s minds. This talent of hers could have been a gift, if she had not suffered from the many struggles caused by it. As a result, her parents got divorced, and her new life takes her to a new high school. During her class, she tries to steer away from her classmates to avoid any difficulties, but Manabe Yoshihisa, who goes to the same class as her, appreciates her abilities. With his help, Kotoura Haruka was able to interact with her friends through their acceptance.

Kotoura-san has been running on the Micro Magazine website, Manga Goccha, and is publishing the third book volume next month.