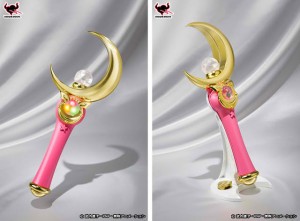 Once upon a time, you probably had one of these as a child. Bandai is giving our childhoods a complete makeover with their latest brand of products called PROPELICA. PROPELICA revamps old Bandai products offered in the 90’s for the fans to enjoy now and first off the PROPELICA list is the Sailor Moon (美少女戦士セーラームーン) Moon Stick (ムーン・スティック).

The PROPELICA Moon Stick is an upgraded version of the 1992 Bandai Sailor Moon Moon Stick. The brand new Moon Stick is sized at a 1:1 ratio and is now built in with the voice of the legendary voice actress, Kotono Mitsuishi (三石 琴乃), the original voice of Sailor Moon (セーラームーン). Now you can really hear Sailor Moon shout Moon Healing Escalation (ムーン・ヒーリング・エスカレーション)!

Now, who says you’re too old to play with toys?