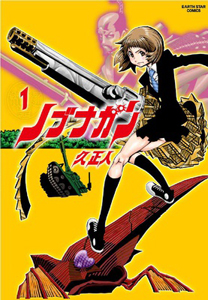 What comes into mind when you hear the names Nobunaga, Newton, and Gandhi? History, right? Perhaps as a student, you didn’t actually enjoy these names as you hear them all over your class. However, as an anime lover, you might appreciate these names, because they’re not just a thing of the past. They’re wild, alive and in action—in a crazy, animated kind of way.

The June issue of Comic Earth Star magazine has revealed that Masato Hisa’s Nobunagun manga is in the works. If you haven’t heard of it, you might want to think of weapons, guns, and cute characters wielding them against each other. Nobunagun has been termed as a “stylish action manga,” with a cute girl as a lead.

The story opens with the high school girl named Shio Ogura, visiting Taiwan on a school trip. She is caught in a surprise attack by terrifying beings by monsters called Evolved Invaders. The military force falls flat against them, but in the middle of the fighting, a group of mysterious E-Gene Holder agents from the government organization DOGOO appeared.

Due to their advanced technology, these agents are capable to wield weapons infused with the spirits of known historical figures. Gandhi is now a barricade, Newton a gravitational maneuver, and so on. Seeing her friend in danger, Shio awakens her ability to wield such similar weapon—the Japanese warlord Oda Nobunaga as a gigantic machine gun.

Hisa has launched Nobunagun in Comic Earth Star in 2011, and the company Earth Star Entertainment has published the second compiled book volume in January. The first chapter of this manga is available online, and the new issue of the Comic Earth Star magazine is running an interview to celebrate the first decade of Hisa’s first launch as a manga creator.

Nobunagun promises a cute group of high school girls, fighting off beasties called Kaiju, and earns the help of historical figures transforming into power of objects.

If you’re slacking off in History, perhaps this may be a great way for you to remember names!