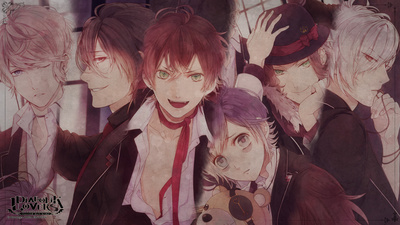 We’ve all been engrossed with something handsomely dark; creatures prowling in the dark yet still looking like the most charming angels you have ever laid your eyes on. It’s quite ironic that we fall in love with something supernaturally dangerous, as if every normal thing is just a bore. Now, when we talk about something dark, superhuman, and absolutely dashing, we know the topic is all about the vamps. We’ve heard a lot from them, these bloodsucking people from movies, television series, animation and such. And yet here’s another vampire story noteworthy to be told.

An event called Rejet Fes 2013 Viva La Revolution has just announced this Sunday, that a new anime production will be released. This features Rejet’s own Diabolik Lovers vampire drama, which have been originally a CD / PSP game franchise. The anime project will be released this year.

The story centers around six Sakamaki vampire brothers known for their aggressive and brutal behavior. Shu (played by Kousuke Toriumi), Reiji (Katsuyuki Konishi), Ayato (Hikaru Midorikawa), Kanato (Yuuki Kaji), Raito (Daisuke Hirakawa) and Subaru (Takashi Kondo). The six of them encounters the heroine, Yui Komori. Yui is a happy, positive-thinking girl who is quite troubled with her ability to see spirits and experience supernatural phenomena.

In her second year in high school, Yui transfers into a new school; a night university which is meant for entertainers and celebrities, because of her father’s work. However, there are rumors that vampires exist among the student body, and the innocent Yui ends up living with the Sakamaki brothers.

Quite terrifying for a girl who wants to run away from her talents! More details will be dished out by the B’s Log magazine, releasing on February 20. This franchise has already been popular as a PSP game and a fan disc called Diabolik Lovers More Blood will be released for the game arriving this year. The production says that character songs will be released in June.

New transfer students will be introduced in the fan disc, which happens to be vampires too! Stay tuned for more juicy details about this vampire centric plot.