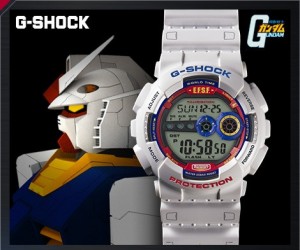 G-Shock is back with their second Mobile Suit Gundam (機動戦士ガンダム) collaboration and this time, the watch boasts the immortal colors of the first ever Gundam, the RX-78-2. This awesome collab came about as a part of the 35th anniversary celebration of the series.

The RX-78-2 made its debut in Mobile Suit Gundam. This Gundam falls into the hands of Amuro Ray (アムロ・レイ) who desperately needed help when a member of the Zeon reconnaissance team attacked the colony he is a part of. As the signature model and the poster boy of the Gundam series, the RX-78-2 has made several appearances in media as well as anime-based merchandises. The RX-78-2 Gundam also towers in front of the Grand Pacific Le Daiba hotel in Odaiba, Tokyo, Japan as a life-sized statue.