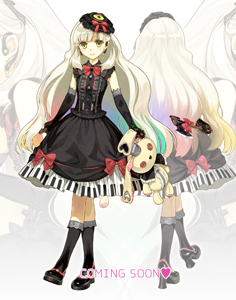 As recently revealed, music label / producer Exit Tunes has created a new female Vocaloid 3 character named Mayu. The gothic-lolita dressed high school student was given a yandere personality—an odd irony of a soft and friendly outward behavior, but turns hostile when aggravated. While this may seem freakish to some, one could not ignore the fact that this new vocaloid is much blessed with charms that is enough to lure a fan.

Accompanied by Usano Mimi, her stuff toy rabbit which was introduced initially as an April Fool’s joke as a parody of the Exit Tune’s Crypton Future Media Character Vocal Series website. She was listed under the new line of vocaloids, the Animaloid. She becomes a best friend to Mayu as she appears in many of her videos, singing and dancing with her.

Mayu has a unique appearance, as different as other vocaloids. Her hat seems like there is a speaker attached to the headdress, her earrings are created to be like Bluetooth headseats. In the videos, Mayu’s hair is a gradient from pale blonde to a rainbow color. The buttons on her dress looks like amplifier knobs and are surrounded with red ribbons. Her entire costume is accented by the piano keyboards on her skirt, and strangely, Mayu seems to be holding an axe with a red ribbon. Mimi is well styled as well, as she has a mic atop her head.

Exit Tunes has stated that Mayu is 15 years old, and she celebrates her birthday every 6th day of May. Her first demo song is called Caramel Sugar, and her first live performance was revealed in the Exit Tunes Academy event on May 6 (notable the vocaloid’s birthday). Hidari, designer for the anime Fractal, made her character design.

Below are demo videos of Mayu, showing off her voice and dance skills. How do you like this new vocaloid?