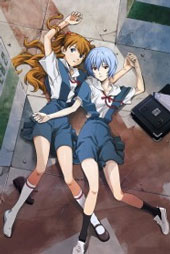 Evangelion 2.0 You Can (Not) Advance is the second film in the remake of the Neon Genesis Evangelion TV anime series. A group of 14-year-olds with giant biomechanical units protect Earth from mysterious Angels. It originally opened June 2009 in Japan.

Summer Wars features a modern family on a midsummer adventure in a light-hearted story of “action entertainment”, which originally opened August 2009 in Japan.