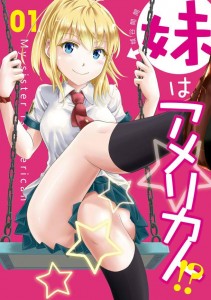 Are you an avid manga reader who can barely tolerate staring at the computer for far too long? If you’re that type of person and you have been reading Imouto ga Americanjin for the quite some time already, a Japanese printed edition has been released after gaining a lot of readers.

Also known as My Sister is an American?!, Imouto ga Americanjin is created by Maken Shiroya. It first made waves through the Nico Nico image hosting website, Nico Nico Seiga under Micro Magazine. The manga follows the life of Rin, a young boy whose mother was divorced when he was younger. His mother son remarried and tagged her American stepdaughter Anna along on her trip back home to Japan, making Rin a hesitant older brother to a foreign sibling.

The printed edition was released recently and has more than just the manga in it: the first volume of Imouto ga Americanjin also contains a bonus hot spring chapter which covers 24 pages long plus a special endorsement of the manga by none other than veteran mangaka Shinji Hiramitsu of the Doberman Detective fame. The printed Imouto ga Americanjin has also been edited to fit the dimensions of the paper’s size plus some de-censoring was made.

Grab your copy of Imouto ga Americanjin and find out how Rin and Anna will simultaneously get used to this massive culture crash.