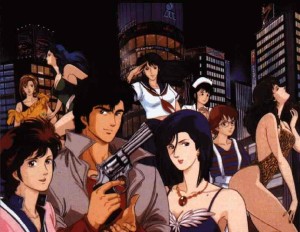 City Hunter is a detective agency run by Ryo Saeba (冴羽獠) and Kaori Makimura (槇村香). Getting to them is easy: clients simply leave the letters “XYZ” written on a blackboard at Shinjuku Station. Ryo Saeba is a sweeper who could rival the best cowboy in the west with his unmatched shooting skills. His downfall however is women. Tall, beautiful, gorgeous women. Tall, beautiful, gorgeous women who seek him for help. When Ryo Saeba begins hounding after women however, his partner Kaori Makimura would cheerfully beat him to a pulp with her gigantic mallet.

Ryo Saeba first made his appearance in Weekly Shonen Jump in 1985. The manga ran from 1985 to 1991 and spawned a total of 35 volumes. Tsukasa Hojo’s action-comedy manga later gained an anime series in 1987 which swept the whole world. This is perhaps Hojo’s biggest franchise, seeing that it led to not only the Hong Kong live action film starred by none other than Jackie Chan and even a South Korean TV Series starred by Lee Min Ho.

City Hunter premieres on Animax Asia on June 6, 2012 at 11:00 PM. Visit the Animax Asia website and check out the airing schedules for City Hunter.

Is it related to City Hunter? A Korean Drama starred by Lee Min Ho?