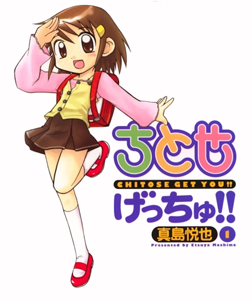 In love, age is just a number; and in this particular discrepancy is the main theme of the upcoming animation, Chitose Get You!! The series have premiered in the local Japanese television scene this July first; let’s dig in deeper and take a look at this curio-sparking plot along with its finely made animation.

Takao Sano takes a step up from being an animator, into directing this SILVER LINK anime adaptation of Etsuya Mashima’s manga. SILVER LINK, the same study who produced Dusk Maiden of Amnesia and C3 promises a hefty dose of fun and laughter at this new droll series. Mashima’s manga focuses on a variety of seinen plot, wherein an eleven year old girl falls in love with an adult man, severely showing her feelings to the verge of harassment just to get his attention.

Originally, Chitose Get You!! is a yonkoma manga series, a term for four-celled manga (also known as 4-koma). It is a popular comic strip format which is mostly consists of easy to read gag comics with four square panels. This style is a familiar theme for various international markets.

With a powerhouse voice cast, an interesting plot and a wonderful eye-candy animation, Chitose Get You!! is a definite fun watch. Ready to take a glimpse of what this series has in store for you? Watch the humorous trailer below: