Charizard Gets Its Own Limited Edition 3DS XL With A Catch 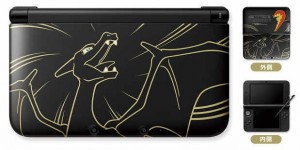 Not too long ago, a special Pikachu edition of the Nintendo 3DS XL was announced by Nintendo. Now, it’s Charizard’s (リザードン) time to shine with its own limited edition 3DS XL.

Fans of the Pokemon series are no stranger to this fire-breathing behemoth. Standing at 5’07” and weighing at 199.6 lbs, Charizard is the sixth entry on the National Pokedex and is the second evolution of the humble Charmander (ヒトカゲ). Game-wise, Charmander evolves into Charmeleon (リザード) at level 16 and into Charizard at level 36.

With its dragon-like appearance, Charizard is just one of the famous fire-type Pokemon stemming from the starter Pokemon. Both a fire and flying type Pokemon, Charizard can learn flying attacks as well as fire type moves. In Pokemon LeafGreen (ポケットモンスター リーフグリーン) and FireRed (ポケットモンスター ファイアレッド), Charizard is the only Pokemon that could learn the fire move, Blast Burn (ブラストバーン).

If the Pikachu 3DS XL was hard to get, imagine how hard it is to get this Charizard 3DS XL. From November 3-26, Nintendo will be holding a lottery which decides which reservation will have the chance of taking this rare 3DS XL unit home. The winners of the lottery will be able to get the unit for only 18,900 JPY (236 USD) from December 15, 2012 to January 14, 2013.

Head on down to the official Pokemon Japan website for more information and wish for lady luck to be on your side if you’re going to join the lottery. Good luck!