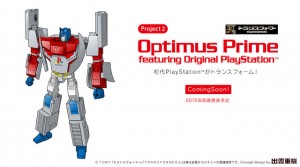 If the Transformers (トランスフォーマー) were to pick a video game console they would transform into to avoid detection, Optimus Prime certainly knows his stuff! In this special anniversary collaboration between Sony Playstation (which is surprisingly already in its 20th anniversary) and Transformers (celebrating its 30th year), Takara Tomy Arts has mashed these two celebrants by coming up with a Sony Playstation Optimus Prime! How cool is that!

Brave, wise and full of compassion, Optimus Prime leads the Autobots in a world called Cybertron. This predominantly red and blue Transformer wields an energy axe which comes and transforms into a trailer truck when blending in urban surroundings. In the original animated series as well as the series of live action movies, Optimus Prime is voiced by Peter Cullen who also voiced fellow Autobot, Ironhide. 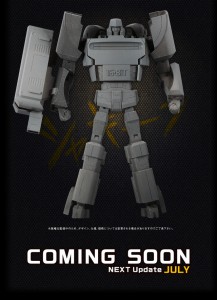 While the Playstation Optimus Prime will be out in early 2015, coming first on the line of Transfomers and video game console combinations is his nemesis and the Decepticons leader, Megatron in the form of a Mega Drive. The Megatron Mega Drive will be out in September for a price of 10,000 JPY (98.20 USD). Wonder what gaming console Bumblebee will be in? Visit the Takara Tomy Arts website for more photos and information.