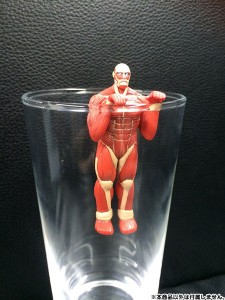 Japanese manga artist Katsuki Tanaka is back with his Cup no Fuchiko series of capsule toys and now it’s Shingeki no Kyojin’s (進撃の巨人) turn! There are a total of ten (10) Cup no Fuchiko SnK designs in colored and sepia consisting of the Colossal Titan (超大型巨人), the Female Titan (女型の巨人), Eren Jaeger (エレン・イェーガー), Mikasa Ackerman (ミカサ・アッカーマン) and everyone’s favorite hechou (兵長 ), Levi (リヴァイ). But first, what in the world are Cup no Fuchikos?

Designed by Katsuki Tanaka, Cup no Fuchikos are collectible capsule toy figures that are placed on the rims of cups or mugs and these adorable figures can balance themselves on it. It all began with a tiny girl with brown hair in pigtails donning a blue and white dress. A year or so later after its release, a series of Puella Magic Madoka Magica (魔法少女まどか☆マギカ) Cup no Fuchiko series was released which was also done by Tanaka.

The characters of Shingeki no Kyojin fit perfectly for the Cup no Fuchiko series – just look at that Colossal Titan peaking over the rim of that cup! The Survey Corps (調査兵団) Cup no Fuchiko figures look like they are ready for action with a leaping Mikasa, Levi dodging the Colossal Titan’s punch and what looks like Eren grasped in the Colossal Titan’s fist. The Female Titan’s crawling action will strongly remind you of her futile escape on the final episode of the anime.

Don’t miss out on adding these awesome figures to your Shingeki no Kyojin collection!