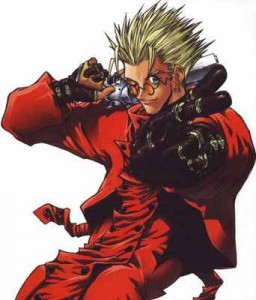 This world is made of love and peace!

The Asgard Anime Vault celebrates old school anime that certainly made every 90′s otaku proud have lived those years as well as introduce young otakus to these great titles. This week, Asgard takes on Trigun.

Everyone is on the look out for Vash the Stampede, the Humanoid Typhoon. With a huge bounty on his head of 60,000,000,000$$ (60 billion double dollers), people just couldn’t get off his trail. Vash meets Meryl Stryfe and Milly Thompson, employees of the Bernardelli Insurance Society, while he is being chased by bandits. This highly skilled gunman, who may or may not be known as Valentinez Alkalinella Xifax Sicidabohertz Gombigobilla Blue Stradivari Talentrent Pierre Andri Charton-Haymoss Ivanovici Baldeus George Doitzel Kaiser III, has a mysterious past thanks to the amnesia he sustained. Later on in his adventures, Vash is joined by Nicholas D. Wolfwood, a priest with the cross-shaped gun.

The space western themed Trigun (トライガン) was created in 1996 as a manga by Yasuhiro Nightow (内藤 泰弘). The original manga had a total of 3 volumes and lasted for a year. The anime followed soon after with a total of 26 episodes.

Underneath all that cheeky smile and peace signs, who is the real Vash the Stampede? What sort of past did he and his brother Knives have as children that led them to this? And what role does the little black cat have in the series?

Trigun is a great series to watch; this anime is loaded with action, comedy and even drama. This is highly recommended for those who want a good mystery to keep them up at night.