Published by SchoolGirlBlogger on June 14, 2012 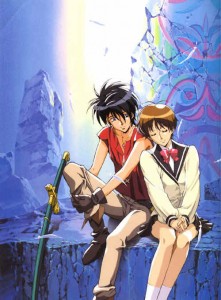 Was it all just a dream? Or a vision?

The Asgard Anime Vault celebrates old school anime that certainly made every 90′s otaku proud of having live those years as well as introduce young otakus to these great titles. This week, Asgard travels to the Gaea and witness The Vision of Escaflowne.

The Vision of Escaflowne (天空のエスカフローネ) is in itself a very magical series. In her childhood, Hitomi Kanzaki was given a set of tarot cards by her grandmother and soon mastered the art of fortune telling. Now in her teens and clearly in love with her track-and-field senior, Hitomi makes a dash that could determine her first kiss. While Amano times Hitomi with her special necklace, a young boy appears out of nowhere with a dangerous dragon at his heels. The boy slays the beast and attains its heart, but is transported back to his home planet Gaea with Hitomi.

The boy who slayed the dragon called Van Slanzar de Fanel is the King of Fanalia and his kingdom is at war with the Zaibach Empire. Hitomi, the Girl from the Mystic Moon (Earth) as she is called, is caught in between but plays a crucial role since her psychic abilities escalate in Gaea. Van weilds a powerful mecha called the Escaflowne in order to stop Dornkirk from reviving the powers of legendary city of Atlantis.

The Vision of Escaflowne is a 26 episode anime series released in April 1996. It was directed by Kazuki Akane and produced by Sunrise Studios. This anime is for everyone who wants a action, drama, romance and fantasy all rolled into one. Former editor-in-chief of Questor – The Ultimate Anime Magazine, Ms. Bambi Eloriaga-Amago has this to say of the series:

There’s something about it that I just find magical. Very simple story, but characterization story pacing, art designs, dialogues and the music… They all come together and complement each other perfectly.