Animation for Kamisama no Inai Nichiyobi 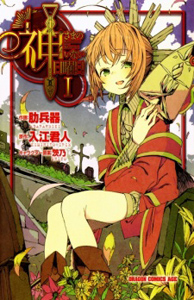 What happens to a world where there is no God? Surely it must be a dark and desolate place, filled with chaos and confusion, of sorrow and despair, of darkness and death. Now this sounds too frightening to be true, and it happened—well, not in real life, but in the mind of Kimihito Irie. Irie founded the concepts for this in the Story of Creation, where there were six days a week for one to work, play and do their task, but on the seventh, everyone must rest, just as He did.

Now, in this story, the god did not just took a rest, but completely abandoned the world in a long duration of time, fifteen years ago, on a Sunday, the world has been left into a slump of despair, having no ruler to put everything in order. At this time, humans can no longer be born, but they also cannot die nor reproduce. This age of darkness has brought about so many threats and dangers, all to which one cannot stop.

Only unique people who can give peace to the dead are called grave keepers. A little girl named Ai works as the grave keeper for a village and she has prepared 47 graves which are meant for the eventual deaths of the member of the community. However, today, she has yet to meet her fate. A man with silver hair, handsome face and fiery red eyes appears before her and identifies himself as Hampine Hambart. He calls himself as a “main eating toy.” However, she remembers this is what her mother left behind as her father’s name, and Ai followed him obediently as he kills everyone in the place, as she thought he is her father.

Irie has launched Kamisama no Inai Nichiyobi series in 2010 with illustrations made by Shino. Take a look at what this world has in store in the video below: