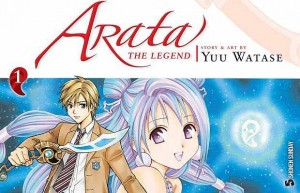 We all fell in love when high school girl Miaka Yuki (夕城 美朱) met Tamahome (鬼宿) inside the Book of the Four Gods in Fushigi Yuugi (ふしぎ遊戯). We all cried when Toya (十夜) sacrificed his hagoromo in order to save Aya Mikage (御景 妖) in Ayashi No Ceres (妖しのセレス). Now, another Yuu Watase (渡瀬 悠宇) manga is getting an Anime adaptation that is sure to make us laugh, cry, fall in love all over again and of course, add this up to a list of other Yuu Watase anime/manga favorites.

Arata: The Legend (アラタカンガタリ 〜革神語〜) is an ongoing manga series created by Yuu Watase in 2008. It tells the story of Arata, a 15-year-old boy who was forced to disguise himself as a girl in order for him to take the role of a candidate for a princess until one can be found. Arata was the unwilling victim of the tradition that takes place every 30 years in which a princess is chosen from the Hime Family so she can serve the Hayagami. Much to his already ill-fated luck, Arata witnessed the murder of Kokuri-hime in the festival he attended. To add more to his problems, the bodyguards of the slain princess mistook him for the murderer, thus putting his life on the line.