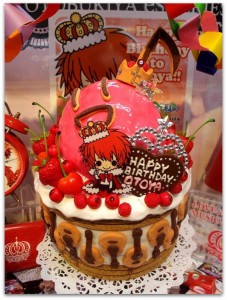 Ittoki Otoya (一十木 音也), the red-head hottie from Uta No Prince-Sama (うたの☆プリンスさまっ♪), will be celebrating his birthday on April 11, but that doesn’t stop Japanese toy company, Kotobukiya, from showing their love for Otoya.

Kotobukiya has proudly displayed this delectable Otoya birthday cake in Akihabara, along with other Otoya collectibles. Kotobukiya also shares the Otoya love with Uta No Prince-Sama fans by putting up a cork board below their display for fans to post their birthday greetings in.

Uta No Prince-Sama tells the story of Haruka Nanami (七海 春歌), a young girl who dreams of composing songs for her favorite idol one day. By enrolling in the Saotome Academy, Haruka stands a chance at becoming a composer herself. Haruka finds herself in Class A with Ittoki Otoya, a boy with dreams of becoming an idol. Will she and Otoya reach their respective dreams?

Kotobukiya’s Otoya birthday display will only be available for viewing for a limited time only. What would your birthday message be for Otoya? Check out Kotobukiya’s blog for more photos.