Usavich Now On Its 5th Season 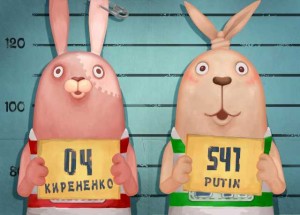 MTV has never failed to deliver cartoons and animated programs that pack on the entertainment. Some notable titles are Beavis and Butthead, Celebrity Deathmatch and Grimmy. The fun is undeniable despite the fact that the shows run on mature humor. Another title worth mentioning is an entry from MTV Japan called Usavich (ウサビッチ )which is now on its fifth season.

MTV Japan has announced this news on their official website last Friday and fans will be happy to know that the fifth season is slated for December. Not so much of a long wait for Usavich fans.

Usavich tells the story of a pair of rabbits named Putin (キレネンコ) and Kirenenko (プーチン) who were slammed behind Russian bars. The minimal space of their cell doesn’t stop the pair of convicted bunnies to cause mayhem within the four walls of their prison. Eventually they break out of prison and would get into more misadventures. The title of the series is a combination of the words “Usagi (うさぎ )” which is the Japanese word for “rabbit” and the word vich to add a Russian ring to it.

Japanese animation studio, Kanaban Graphics, is spearheaded by Satoshi Tomioka and has been creating Usavich for MTV Japan since 2006.