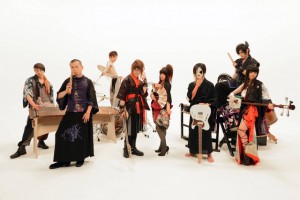 Japan is one of the most versatile countries in existence to perfectly combine their traditional and modern cultures in one awesome output and the WagakkiBand (和楽器バンド) shows us just that with their latest single which happens to be a cover of a Hatsune Miku (初音ミク) song.

Senbonzakura (千本桜), otherwise known as A Thousand Cherry Blossoms, goes with a tune that will strongly remind you of the East and the WagakkiBand gave it a more distinct Japanese vibe as the band has incorporated traditional Japanese musical instruments such as the koto (箏), shamisen (三味線) as well as a flute called the shakuhachi (尺八). To give it a modern twist, drums and electric guitars are played in the style of rock which give the song a powerful boost. Put them together and you get a mystical song of epic proportions. To make things even cooler, the WagakkiBand donned traditional Japanese costumes for their video with a very modern take on it.

The WagakkiBand’s cover of Senbonzakura is the carrier single of their latest album VocaloZanmai (ボカロ三昧). The album’s name alone will give you a hint that the WagakkiBand has indeed covered Vocaloid (ボーカロイド) songs!

VocaloZanmai will be released on April 23, 2014 so for now, check out both videos below and drown yourself in these songs dipped in melodies that will strongly remind you of the Orient. One way ticket to Tokyo please.