The Strange Tale of Panorama Island Finally Released In English 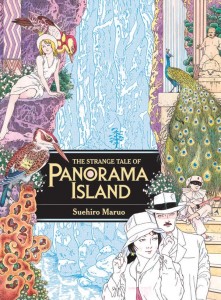 There is nothing but a good story to keep you up at night and Suehiro Maruo’s (丸尾 末広) manga adaptation of Edogawa Rampo’s (江戸川 乱歩) The Strange Tale of Panorama Island (パノラマ島綺譚) will certainly keep you turning pages late into the night. After almost four years since the announcement that Last Gasp, a comic book publishing company, has been given the license to handle Maruo and Rampo’s work of art, the long wait is finally over. The Strange Tale of Panorama Island has already been translated into English and is ready for release.

The Strange Tale of Panorama Island follows the life of Hitomi Hirosuke, a failed novelist. Down on his luck, Hitomi comes upon information that his former classmate, the son of a rich family, has died. Taking advantage of the fact that Hitomi looks uncannily like his deceased classmate, Hitomi proceeds to fake his own death and somehow lead the rich family into believing that he’s their dead son. With immense wealth and power in his hands, what will Hitomi make out of this?

Visit Last Gasp’s official website and find out how you can grab a copy of The Strange Tale of Panorama Island. The website also features sneak peaks of the manga so make sure to check it out.