Tao Tsuchiya Steps Up To The Rurouni Kenshin Plate 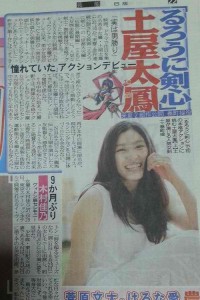 If the first Rurouni Kenshin live-action movie has left a great impression on you, wait until the second movie comes out! The cast has already been revealed and according to Japanese newspaper, Sports Hochi, Tao Tsuchiya (つちや たお) will be filling in the shoes of the young kunoichi, Misao Makimachi (巻町 操).

Born on February 3, 1995, the 18-year-old actress hails from Tokyo, Japan. While Tsuchiya is no stranger to acting (Tsuchiya having first appeared in the 2008 film, Tokyo Sonata), Misao Makimachi is Tsuchiya’s first ever action role and has reportedly been doing her own stunts. While the shooting continues, Tsuchiya trains everyday for her role as the Kyoto Arc’s feisty little ninja girl. Just where did she get this gung-ho energy that’s so Misao? Apparently, the actress was so taken with the first Rurouni Kenshin movie that she auditioned for the second film and landed a role!

If Tsuchiya doesn’t look like Misao already, wait until we see her in action! More Rurouni Kenshin news are on your way so stay tuned to Asgard Anime!