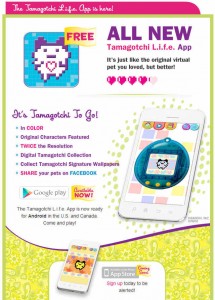 Tamagotchi (たまごっち) celebrates its Sweet 16 in the toys and games industry by having its own Android App version!

The world famous game that started the virtual pet craze began in 1996, thanks to a collaboration between WiZ’s Akihiro Yokoi and Bandai’s Aki Maita. The original Tamagotchi comes in a handy, little egg-shaped device which houses the digital pet inside it. The name comes from the Japanese word tamago which means egg and the English word watch.

Fast forward to 2013 and Tamagotchi has officially celebrated its 16 year anniversary in the industry. With that said, Namco Bandai games now has an Android app called Tamagotchi L.i.f.e. (Love is Fun Everywhere). An iOS version of the Tamagotchi L.i.f.e will be available soon. In the mean time, check out this video below and don’t forget to visit Google Play to get Tamagotchi L.i.f.e on your Android unit! Did we mention that this app is free to download?