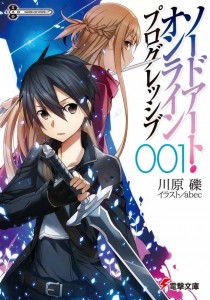 Just when you thought Sword Art Online (ソードアート・オンライン) was over, think again. Sword Art Online Progressive will make an appearance on the pages of Dengeki G’s Magazine (電撃G’s magazine) starting on their August issue which will be released next month!

The news of Sword Art Online Progressive receiving a manga version was first announced last week by illustrator, Kiseki Himura (比村奇石). Dengeki G confirms the appearance of Progressive on their official Twitter account with their post on May 1.

Progressive was a recent addition to Kawahara’s light novel line. It is an ongoing series that began on October 2012 with currently a single volume out. Like the original Sword Art Online, as well as Kawahara’s other work entitled Accel World (アクセル・ワールド), Progressive is published by ASCII Media Works (株式会社アスキー・メディアワークス).

If you haven’t read Progressive yet, what are you expecting to appear in the manga? Don’t forget to grab your copy of Dengeki G’s Magazine on June 29, 2013 and relive the adventures of Sword Art Online in another light!