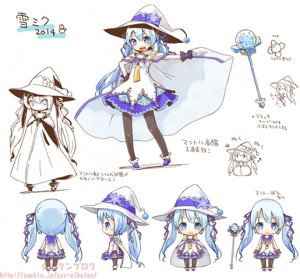 Have you always wished you could give Hatsune Miku (初音ミク) a brand new, snowy make over? Your wish has been granted thanks to the Good Smile Company (グッドスマイルカンパニー) and Piapro (ピアプロ)! The annual Snow Miku Design Contest is already up and running and goes with the theme of “Plants (Grass, Flowers and Trees) of Winter in Hokkaido”. Her little bunny friend Yukine, who was introduced last year, is also included in the design.

Snow Miku is simply Hatsune Miku all decked out in a winter theme. She has first appeared in 2010 and has become a staple in the Sapporo Snow Festival held annually in Hokkaido, Japan. Sapporo is where Crypton Future Media INC., Miku’s developers, is located, which is then the birth place of the world famous Vocaloid (ボーカロイド).

Got a design in mind? Head on down to the official Piapro website so you can read up on the rules and of course, learn how to submit your entry. Get your creative juices flowing because deadline of entries will be on May 7, 2014 at 5:00 PM JST. The sole Winner will be announced during the live broadcast of Hatsune Miku no Jikan: 6th Period on May 16, 2014 and his/her design will be immortalized in an adorable form of a Nendoroid!

Give this once-in-a-lifetime shot a try and your Snow Miku design just might be next year’s winner!