Shingeki No Kyojin Real Escape Game Only Has 120 Survivors 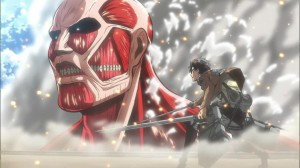 See how hard it is to be a member of the Survey Corps (調査兵団)?

The first Shingeki no Kyojin (進撃の巨人) Real Escape Game hosted by SCRAP that was scheduled on May 3 and 4, 2014 has raked in a whopping 1,600 participants. Like the famous anime/manga franchise however, only few made it out and in the game’s case, only 120 individuals finished the game.

In the Shingeki no Kyojin Real Escape Game, players act out as Survey Corps trainees and have to solve puzzles in order to escape and win the game. The scenario is that Titans (巨人) have broken through the fortress during their graduation ceremony and players have only one (1) hour to get out. Team work is the key to winning the game and less than 10% of the players have got made it out “alive”.

The first Shingeki no Kyojin Escape from a Certain Fortress game was held in the Yokohama Stadium for a fee of 3,000 JPY (29.46 USD) for pre-orders and 3,500 JPY (34.38 USD) on regular pricing. The next Shingeki no Kyojin Real Escape games will be held on the following areas with the same ticket prices:

Do YOU have what it takes to be a member of the Survey Corps?