Scheme With The Kaiju In Ultraman Bar 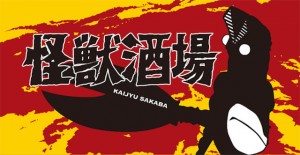 Bars are great for hanging out with friends, drowning your miseries in drinks and… scheming an evil plot to defeat Ultraman (ウルトラマン) once and for all. A bar based on Ultraman’s multitude of nemesis called Kaiju Sakaba (怪獣酒場) will be open for us humans starting on March of 2014.

Located in Kawasaki (川崎市), the Kaiju Sakaba bar will be open from 4:30 pm to 11:00 pm daily. The concept of the bar is simple: the Kaiju Sakaba is a place where monsters defeated by Ultraman come to ease their sorrows in food and drink and eventually hatch more diabolical plans in the process. Humans will only get their chance of visiting the tavern once a year and the middle of March is the month to remember.

With the Kaiju Sakaba open for humans, kaijus (怪獣) will be a pretty rare sight. However, some will visit the Kaiju Sakaba to have a drink, cause trouble or conquer Earth right then and there. That would be an awesome sight to see!

The Kaiju Sakaba will only be open for a year so make sure you drop by and visit. For more information, visit their official website and read your fill. Will Ultraman pop in the Kaiju Sakaba if a Kaiju runs amok in there?