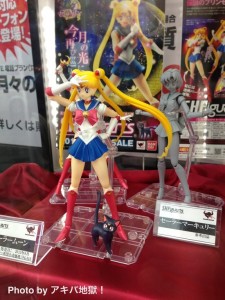 While news of Sailor Moon (美少女戦士セーラームーン) is making a comeback this year was spreading faster than the speed of light all over the world, Akihabara was dominated by gigantic ads and even commercials of the special Sailor Moon S.H Figuarts. Here’s another Sailor Moon Figuarts news that is certain to make the fans go wild: The appearance of an unpainted, Sailor Mercury (セーラーマーキュリー) S.H Figuarts prototype in the display window of Sofmap (ソフマップ) in Akihabara is giving fans hope that all of the members of the inner senshi will have their own Figuarts version.

With an I.Q. level measured at 300, you may think that Ami Mizuno (水野 亜美) is just the geek of the show. However, when she transforms, she becomes Sailor Mercury and won’t certainly hesitate to blow her Mercury Bubbles Blast (シャボン・スプレー) coming your way. Sailor Mercury is the brains of the group. Also referred to as the Soldier of Water and Intellect (水と知性の戦士), Sailor Mercury is the third guardian to have been awaken. With her hand-held super computer that can make your latest mobile phone go green with envy, Sailor Mercury provides the team with information regarding their enemies, be it weak points or specific details.

Are you ready for Sailor Mercury’s S.H Figuarts? We sure are and we can’t wait for the other senshi as well. For those on the other side of the world, visit Bluefin Tamashii Nations USA Facebook fan page for updates on the Sailor Moon figuarts release.