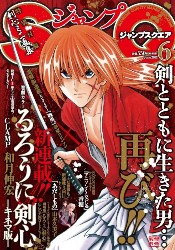 On December 2011, an announcement was made that Rurouni Kenshin will appear in mangas once again in May 2012. May has already arrived and the red-haired samurai has returned to Jump Square, along with other great manga titles Blue Exorcist, D-Gray Man and Claymore. 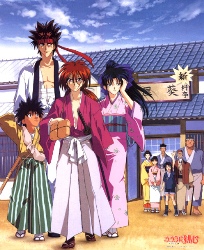 The Cinema Version manga’s art and writing are both handled by Watsuki Nobohiru, the original creator of the series. Watsuki, who will be celebrating his 42nd birthday on May 26, will appear in an interview in the latest Jump Square issue where he talks about his manga as well as the movie. To the delight of fans, Jump Square will also include colored illustrations as well as freebies of exclusive hand towels for thousands of fans.

Rurouni Kenshin – Cinema Version -, being a remake of the original manga, begins with Kenshin Himura’s meeting with Kaoru Kamiya and the adventures that followed. Shounen Jump will serialize the continuation of the Cinema Version come August. The sequel, entitled “Rurouni Kenshin -Meiji Kenkaku Romantan- Episode Zero“, shows why Kenshin has decided to stay at the Kamiya Dojo.