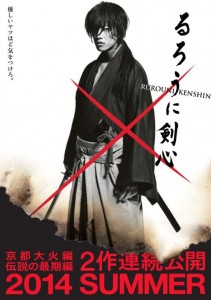 Perhaps the most celebrated Rurouni Kenshin (るろうに剣心 -明治剣客浪漫譚-) story line, whether if it’s from the anime or manga, is the Kyoto Arc which introduced us to new allies in the form of a reformed Oniwabanshu (お庭番衆) under Misao Makimachi’s (巻町 操) leadership and a foe in the person of Shishio Makoto (志々雄 真実) who is unmatched by any other anime villain. It’s now the live action movie’s take on the Kyoto Arc! Movie posters are out and about already and the design is simple but for RK fans, it already tells a lot: the movie posters used in the previous live action film literally had been burned at the bottom with the 2014 movie details pasted by hand where the burns left their marks. The burns greatly symbolize Shishio as he was burned alive and it was part of plan to set Kyoto on fire until the Kenshingumi got the upper hand. To make things more interesting, there are only 440 of these posters released. Why is that? 440 is a play of Japanese words. Read the numbers individually in Japanese (using shi instead of yon for four) and you’ll get the word Shishio.

Another way of adding fuel to your fire of excitement for the latest RK live action movie is the trailer that everyone has been waiting for! A short clip featuring scenes from the latest RK movies have been mashed together into a 33-second trailer which is enough for you to whine for summer to arrive in haste. That’s enough talk from us so go and check out the trailer below! Wonder if we could grab some of those movie posters…