Rathalos Makes It To The Guinness Book Of World Records 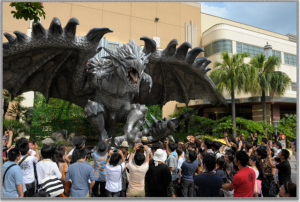 The latest entry in the pages of the Guinness Book of World Records comes from a gigantic, 20-meter silver, dragon-like creature.

Capcom, together with Universal Studios Japan, has come up with an enormous animatronic statue of the Rathalos, a creature from the immensely popular video game Monster Hunter (モンスターハンター). The animatronic Rethalos is as real as it could be: it shoots smoke, moves and roars. This partnership between Capcom and Universal Studios Japan is aimed at giving visitors a real Monster Hunter experience.

This enormous statue received the title of largest game-based statue in the world and was immediately entered into the Guinness Book of World Records.

The Rathalos is a wyver, a creature having a dragon’s head, body and wings but having only two legs at most. Their tales are mostly barbed. In the world of Monster Hunter, the Rathalos is known for its flame patterned wings and crimson coloring. Also known as Rioreia in the US version, the Rethalos has two species: the Azure Rathalos, which can be found on the same areas as the red species reside, and the Silver Rathalos are found in secluded areas. The female of the species, regardless of variety, is called a Rathian. The Rathian is a slighter version of the Rathalos and is primarily green in color.

Aside from the silver Rathalos, it also has a golden counterpart found on the same venue.